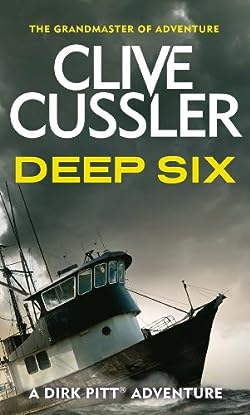 Book #7 in the Dirk Pitt series

A deadly tide of poison flows into ocean waters. A ghost ship drifts across the empty northern Pacific. A luxury Soviet liner blazes into a funeral pyre. The Presidential yacht cruises the Potomac night — and the President disappears without a trace.

For the President of the United States, the crisis point is approaching fast. With his new Soviet initiative entering its most crucial phase, the President suddenly finds himself faced with a pollution disaster of potentially cataclysmic proportions. And then – incredibly – he vanishes into thin air, leaving his country poised on the brink of chaos.

It’s left to troubleshooter extraordinaire Dirk Pitt to hotwire the connections between these two shattering events. From the icy Alaskan waters to a Korean shipbreaker’s yard; from a Caribbean shipwreck to a blazing inferno in the Mississippi Delta, he tracks down a conspiracy so fiendish and sophisticated that even the superpowers are helpless in its grip . . .