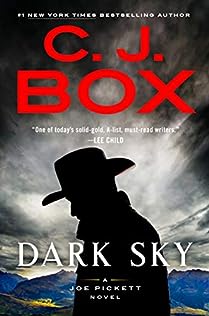 Wyoming game warden Joe Pickett must accompany a Silicon Valley CEO on a hunting trip–but soon learns that he himself may be the hunted–in the thrilling new novel from #1 New York Times bestselling author C. J. Box.

It’s a crisp October morning in Wyoming’s Twelve Sleep County, and game warden Joe Pickett should be keeping watch over his patch. Instead, the state governor has roped him into leading Silicon Valley billionaire Steven Price on a hunting trip. The department is facing major budget cuts and Price’s social media empire could bring serious business into the state – if someone can persuade him of Wyoming’s charms. It looks like a straightforward job, but unbeknownst to Joe, there is a hunter hot on their heels, one with a different manner of prey in mind.

When Joe’s daughter Sheridan and his closest friend Nate Romanowksi learn of the threat, they head out to rescue Joe and his charge. To get out of the woods alive, they will all have to draw on their wits and knowledge of the outdoors as they confront the worst man – and nature – can throw at them.

When the governor of Wyoming gives Joe Pickett the thankless task of taking a tech baron on an elk hunting trip, Joe reluctantly treks into the wilderness with his high-profile charge. But as they venture into the woods, a man-hunter is hot on their heels, driven by a desire for revenge. Finding himself without a weapon, a horse, or a way to communicate, Joe must rely on his wits and his knowledge of the outdoors to protect himself and his companion.

Meanwhile, Joe’s closest friend, Nate Romanowski, and his own daughter Sheridan learn of the threat to Joe’s life and follow him into the woods. In a stunning final showdown, the three of them come up against the worst that nature–and man–have to offer.

One Response to “Dark Sky”