Last Updated on March 11, 2022 Reading the C. J. Box books in order means catching up with 16 Joe Pickett novels, 2 Cody Hoyt series, 3 Cassie Dewell series, 2 standalone novels and 2 short stories as well. Quite a lot of books, but well worth the read!

Here are the C. J. Box novels in order of publication and chronological order for all his series. 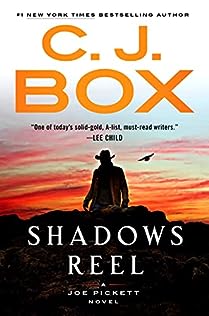 The Joe Pickett series is about a game warden living in Wyoming, who is not very popular in the area since everyone around there hunts. Joe is as straight as it gets and finds his calling as he solves murder case after case.

Should we read the Joe Pickett novels in order?

I’ve read most of the books in this series in order, and I think they can be read out of order easily. Each book stands on its own and if you read them out of order, you won’t miss much.

However, if you’re on this site, you know how much I love reading the books in order, so you definitely know my view on this question 🙂

The Cody Hoyt series has currently 2 books and has at center stage the alcoholic Cody Hoyt, who is a cop on the way to destruction. He was a great cop and had everything going for him until the alcohol got the better of him.

Over the years the author C. J. Box has written two standalone novels as well. They are listed below in the order of publication.

The author is a native of Wyoming. Born in 1958 in Casper, WY, where he also grew up, he graduated with a degree in Mass Communications from the University of Denver.

Over the years he held many jobs, including being a ranch hand, a fishing guide, surveyor, as well as a small town newspaper reporter and editor. At some point, he became the owner of an international tourism marketing firm together with his wife, Laurie.

He was and is involved in various aspects of tourism, earning the “BIG WYO” Award from the state tourism industry. He was on the Board of Directors of Cheyenne Frontier Days Rodeo and these days he serves on the Wyoming Office of Tourism Board.

Several of the C J Box books received awards, including the Anthony Award, Macavity Award, the Gumshoe Award and the Barry for Open Season. His first standalone novel, Blue Season, received the Edgar Award for Best Mystery Novel of 2008.

C J Box is currently living outside of Cheyenne with his family.

The C J Box novels have been translated into over 20 languages (and in fact, my first Joe Pickett novel was several years back in Hungarian – my native language).

At some point, I owned all the Joe Pickett books, but I’ve in the meantime given many to the local charity bookshop for those who cannot afford to buy books. I still have one more, a trade paperback called Free Fire, bought several years ago.

Of course I continue to buy the latest Joe Pickett novels as soon as they come out, however, these days I rather buy them as Kindle downloads due to lack of space in my home. For me, reading the C J Box books in order is one of the biggest joys when I know the latest novel has been just released and I can get ahold of it right away.

The most popular C.J. Box series is Joe Pickett. He is a Wyoming game warden in the small town of Twelve Sleep. This is a town of hunters, so it’s understandable that game wardens are not viewed with the utmost respect by the natives.

Joe is especially hated because he doesn’t take bribes and he takes his job seriously. Most people there love their rifles and love their drinks as well, not a healthy combination, especially when Joe has to give tickets to armed drunks who are caught in the act.

In The Disappeared, the latest Joe Pickett novel, Joe works two cases at the same time. First, there is the disappearance of three British women who were visiting a local ranch, and second, he and his friend, Nate Romanowski, are called to investigate the killings of some eagles, which is a Federal offense. The problem is that someone wants Joe to stop investigating, but so far it’s not sure which case is someone trying to stall.

Cassie Dewell is the author’s latest series started in 2013 with currently 4 books written. The latest one is The Bitterroots. Cassie Dewell is a former sheriff’s investigator who wants to work for herself in private practice. In each book she takes on cases for clients and friends. In Bitteroots she takes on the case of a man who is accused of assaulting a woman. She initially doesn’t much want to do it, but eventually she does.