Phillip DePoy was born in 1950 in Rockford, Illinois. At the age of five, his family moved to Atlanta.

He always wanted to write. In the 10th grade, he submitted his first short story to his teacher. After reading it, his teacher encouraged Phillip to become a writer.

At the age of 15, in 1965 he started his professional career with the Actors and Writers Workshop. After getting a masters degree in performance art, he became a writer in residence for the Georgia Council for the Arts.

In 2002 he received the Edgar Award best mystery play for Easy. Some of his books were nominated for various awards as well (Shamus finalist).

Currently, Phillip DePoy is director of theater at Clayton State University, as well as a mystery writer. In addition to his series, he also wrote a standalone mystery called The King James Conspiracy.

Flap Tucker is a detective with a special ability: he is using his intuition to find lost things … or people. And he relies on meditation rather than on a gun to do so.

Fever Devilin is a folklorist who has returned home to the Georgian Appalachians, leaving behind the world of the academia. But when he returns, home is not quite the way he left it behind.

Foggy Moskowitz is a Jewish former car thief and current amateur PI working in Florida in the Child Protective Services in the early 1970s.

Here are the Phillip DePoy books in order for all his series. 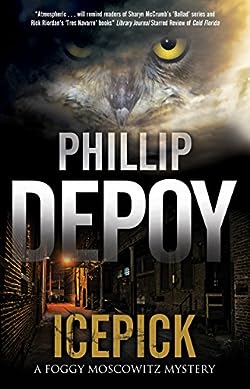