Last Updated on December 9, 2022 P.J. Tracy (or P J Tracy, or PJ Tracy) is the mom and daughter team best known for their Monkeewrench thriller series.

Monkeewrench, the author duo’s only thriller series, started out as a standalone novel, however at the encouragement and enthusiasm of the publishers, the author duo continued to write, and today have ten books in the series with the latest one Ice Cold Heart released in 2019.

A new series featuring Detective Margaret Nolan was released in early 2021 with Deep Into the Dark, followed by Desolation Canyon in 2022, and The Devil You Know in 2023. While retaining the P.J. Tracy name, this time the series is being written by Tracy alone, since P.J. passed away in 2016.

Here are the P.J. Tracy books in reading order for their popular Monkeewrench and Margaret Nolan series, and the standalone novels. I will not list here the romance novels written under other pseudonyms since that genre goes beyond the scope of this page. 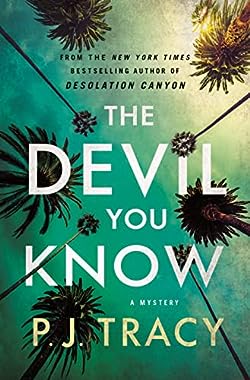 PJ Tracy is made up of a mother-and-daughter writing team.

Patricia Lambrecht loved to say she was a college dropout and she should have no business writing books, but that’s exactly what she ended up doing – and exactly why she dropped out of college: to focus on writing her stories. Her very first short story was published in The Saturday Evening Post. At this time, her daughter, Tracy, was merely 8 years old and had no idea about the mother’s calculation of luring her into the writing business alongside herself. Over the years, she has been working as a freelancer writing short stories, magazine articles as well as romance novels while raising her daughter.

Traci Lambrecht loves horses and has spent many hours during her childhood riding and showing horses. She attended the St. Olaf College in Northfield, Minnesota from where she graduated with a degree in Russian studies. She also studied voice at the same college, later becoming for a while an opera singer.

One of her passions was traveling and singing in rock bands all over the place, so she started to write in order to finance above-said hobbies. As time went by, she soon realized that what she really wanted to do was writing above all, much to her mom’s delight, who took no time in pulling her into the new family business, that of writing successful thriller books together. It was a very natural progression considering the fact that both mother and daughter loved writing since their childhoods. First, Tracy started to write to finance her travel and singing in rock bands passion, but eventually she realized that writing was a fulfilling dream as well.

Initially, the mother-daughter duo collaborated on various short stories, also wrote romance novels in order to finance their expenses, under several different pseudonyms, including PJ Platz, PJ Lambrecht, Mariah Kent, Melinda Cross, and Jessica McBain. Once they realized that they’d prefer writing books in the genre they also love reading most – thrillers, the game was on, and series featuring the software company Monkeewrench was born. Each novel focuses on serial killer cases, killer computer games, deep and dark secrets, cyber crime, and various other homicide cases solved by the brave Minneapolis homicide detectives Leo Magozzi and Gino Rolseth and the company founders Grace MacBride and Annie Belinsky and members.

The first of the PJ tracy books in the Monkeewrench series is called – Monkeewrench, aka Want To Play?. It was hugely successful and launched the mother-daughter team’s popular series of novels featuring Detectives Gino and Magozzi and a team of hackers, who investigate difficult and gruesome crimes in Minnesota. It was also the book that hooked me on this series right away. People being murdered and there is a connection to a new computer game? Sounds right up my alley. Ice Cold Heart is the latest book in the series with the Minneapolis homicide cops and Monkeewrench. Currently, it includes ten novels.

The authors wrote the debut novel in 2002, and it was released in 2003. In an interview, Tracy mentioned that she always loved solving cases, so it was a given that their common foray into the world of novel writing would include the crime thriller genre. Also, as her father was working in the IT field since the 1970s, it was easy for the duo team to combine crime solving with the internet, as they had access to quite a lot of source material. In addition to their Monkeewrench and the Detective Margaret Nolan books, the author duo also has Return of the Magi as part of their standalone novels.

PJ passed away in 2016, while Traci spends her time in rural Minnesota, writing her next novels. Before the mom died, they used to write the PJ tracy books in their office near Stillwater.

The New York Times bestseller mother-daughter writing duo is a winner of the Anthony, Barry, Gumshoe, and Minnesota Book Awards. Monkeewrench, LIVE BAIT, Dead Run, Snow Blind, Shoot to Thrill, Off the Grid, The Sixth Idea, and Nothing Stays Buried and The Guilty Dead are considered New York Times national and international bestsellers, which have been translated so far in over 20 languages.