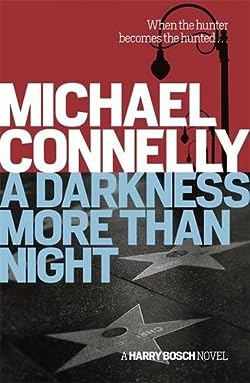 Terrence McCaleb is asked by the LAPD to help them investigate a series of murders that have them baffled.

They are the kind of ritualized killings that McCaleb specialized in solving with the FBI, and he is reluctantly drawn from his peaceful new life back into the horror and excitement of tracking down a terrifying homicidal maniac. More horrifying still, the suspect who seems to fit the profile that McCaleb develops is someone he has known and worked with in the past: Detective Harry Bosch.

A Darkness More Than Night is a fresh and lightning-paced excursion into the dark side of Los Angeles and the hidden corners of the human heart, by a writer hailed by the Los Angeles Times as one of “the top rank of a new generation of crime writers”.