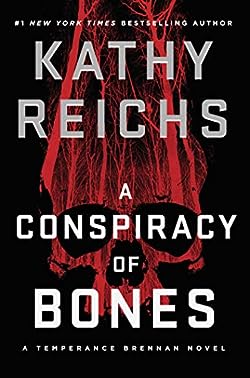 From worrying about her daughter serving in Afghanistan, to she and her fiancée’s complicated living arrangement, Temperance Brennan is feeling the pressure.

And things are bleak on the professional front too. Her beloved boss, Tim Larabee has died a heartbreaking death and his replacement, Margot Heavner, has not forgotten her long-standing feud with Tempe. Heavner might not be able to fire Tempe, but she can make it her mission to make her life a living hell.

So when a mutilated corpse is found in a rural area, Dr. Temperance Brennan isn’t allowed anywhere near the site. The man’s identity is unknown, his cause of death is unclear. This is Dr. Brennan’s speciality, but despite the body lacking a face, hands and organs, Heavner refuses to ask Tempe for help with the investigation.

But in blocking Tempe, is Heavner allowing a killer to walk free?

Who was the faceless man? and why was he carrying the name of a child missing for almost a decade?

Despite being exiled from the Mecklenburg County Medical Examiner facility, Tempe vows to uncover the truth. The more that Tempe discovers, the darker and more twisted the picture becomes.

Investigating alone, Tempe is already out of her depth, and the deeper she goes the less chance she has of coming out of it alive…