Last Updated on March 17, 2022 Jacqueline Winspear is the author of the historical mystery series Maisie Dobbs, featuring Maisie, a psychologist and private detective in London starting out in the 1920s after the end of WWI.

The first of Jacqueline Winspear’s books in the series was published in 2003, and the new book appears in early 2022under the title A Sunlit Weapon, the 17th book

Here are the Jacqueline Winspear books in order for her Maisie Dobbs historical mystery novels. The publication order and reading order are the same in this series. 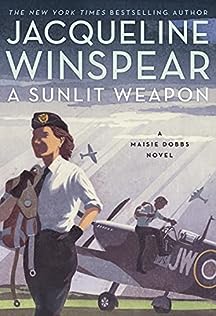 Maisie Dobbs Series In order of Reading and Publication Order

About the Maisie Dobbs Series

The most popular of Jacqueline Winspear’s books are undoubtedly the Maisie Dobbs series set in post-WWI Britain. In fact, they cover the times between WWI and WWII with all the harshness of those years. While each book is set around a particular mystery, readers of this series can learn a lot about those early European times: England between World War I and II. The actual Maisie Dobbs mystery are strongly interconnected with the after-effects of the Great War, showing things that happened to regular, everyday people in those tragic times.

Maisie Dobbs started working at the age of 13 as a maid in a Belgravia mansion where she was often found reading books in the owner’s library. Lady Rowan and a family friend, Dr. Maurice Blanche supported her thirst for knowledge and encouraged her to get a better education, however soon the Great War broke out, and her studies had to be interrupted when Maisie went to enlist as a nurse. In 1929 she set up her own female investigator business where she took her first case about a suspected case of a derailment, a case that not only involved a ruthless serial killer, but also brought her back to her war-related past.

Birds of a Feather

In the second book, after a year, Maisie’s business began to flourish. She now has an assistant, a professional office, and she even started co-operating with Detective Inspector Stratton of Scotland Yard’s Murder Squad. Maisie’s next case involves finding a runaway heiress who was kept restricted in a golden cage by her father. The woman’s father wants her brought home, but this particular case brings her working closer with Stratton, who is after a murder case in Coulsden.

Here Maisie Dobbs investigates the death of a WWI pilot, a task that takes her back to her unhappy war days. Maisie, who is also a psychologist along with being a private investigator, takes the case requested by the pilot’s mother who doesn’t believe her son was killed in the war. At the same time she also meets again people she had known before, like her mentor, Maurice Blanche, and  Priscilla Evernden, her friend from college who seems to have ties to the very case she is investigating.

In Messenger of Truth, Maisie Dobbs investigates again the dark legacy of the World War I in a society struggling to recollect itself in difficult times. But to solve the mystery of the artist’s death, she will have to remain steady as the forces behind his death come out of the shadows to silence her. At this time she is investigating the case of famed Mayfair gallery, Nicholas Bassington-Hope, who seemingly died in an accident, but the man’s twin sister believes otherwise.

This time, Maisie Dobbs works strange series of crimes in a small rural community. An old friend asks her to investigate certain matters concerning a potential land purchase in Kent. What she finds there are mysterious fires that are set in the village with alarming regularity, and a series of petty crimes which suggest darker criminal forces at work.  As Maisie discovers, the villagers are prejudiced against outsiders who flock to Kent at harvest time and they seem possessed by the legacy of a wartime Zeppelin raid.

During Christmas Eve 1931, Maisie Dobbs is off to visit a client when she witnesses a man commit suicide on a busy London street. The following day, the prime minister’s office receives a letter threatening a massive loss of life if certain demands are not met—and the writer mentions Maisie by name. Soon Maisie becomes involved in a race against time to find a man who proves he has the knowledge and will to inflict death and destruction on thousands of innocent people.

The Mapping of Love and Death

This story goes back and forth between August 1914 in the Santa Ynez Valley in California and the spring of 1932, when the remains of Michael Clifton—youngest son of an Englishman who had emigrated to America when he was in his late teens are found in France. Michael’s parents hire Masie to find a woman who seemed to have corresponded with Michael in the form of love letters that were found among his relics. The investigation takes Maisie from London’s most exclusive drawing rooms to its most downtrodden neighborhoods, forcing her to wrestle with memories of serving as a nurse in the first world war.

A Lesson in Secrets

It is the summer of 1932 when Maisie Dobbs is asked by Scotland Yard’s Special Branch and the Secret Service to go on an undercover assignment to a private college in Cambridge to monitor any activities, “not in the interests of His Majesty’s Government.” She soon discovers that the circumstances of Liddicote’s death appear inextricably linked to the suspicious comings and goings of faculty and students under her surveillance.

In April 1933, Maisie works with costermongers of Covent Garden. One of them, Eddie Pettit, was killed in a car accident, and Maisie is asked to investigate. Maisie’s own father was once a costermonger, so she knows their way of life quite well. As Maisie uncovers lies and manipulation on a national scale, she must decide whether to risk all to see justice done.

Leaving Everything Most Loved

Maisie Dobbs investigates the murder of Indian immigrants in London in 1933. Scotland Yard failed to make any arrest in the case, and there is reason to believe they failed to conduct a thorough investigation. Bringing a crucial chapter in the life and times of Maisie Dobbs to a close, Leaving Everything Most Loved marks a pivotal moment in this outstanding mystery book series.

It is 1937, four years after Maisie left England. Her stepmother asks her to go back because her father is not getting younger either. On the way, however, she realizes she doesn’t want to go home, so she heads for Gibraltar where she encounters another murder case that she has to solve.

Working with the British Secret Service on an undercover mission, Maisie Dobbs is sent to Hitler’s Germany where she has to retrieve a prisoner from Dachau, on the outskirts of Munich. Except, her own enemy, the one who might have been the cause for her husband’s death, is on her trail as well.

In This Grave Hour

When Prime Minister Neville Chamberlain broadcasts to the nation Britain’s declaration of war with Germany, a senior Secret Service agent breaks into Maisie Dobbs’ flat with an urgent assignment: find the killer of a man who escaped occupied Belgium as a boy, some twenty-three years earlier during the first world war. As Maisie’s search for the killer escalates, the country braces for what is to come.

To Die But Once

After England also went to war against Germany,  Maisie Dobbs started investigating the disappearance of a young apprentice working on a hush-hush government contract, which leads her from the countryside of rural Hampshire to the web of wartime opportunism exploited by one of the London underworld’s most powerful men.

In this story, Maisie Dobbs investigates the mysterious murder of Catherine Saxon, an American war correspondent in London during the Blitz. Entangled in an investigation linked to the power of wartime propaganda and American political intrigue being played out in Britain, Maisie will face losing her dearest friend—and the possibility that she might be falling in love again.

The Consequences of Fear

As Europe buckles under Nazi occupation, Maisie Dobbs investigates a possible murder that threatens devastating repercussions for Britain’s war efforts in September 1941. As Maisie becomes entangled in a power struggle between Britain’s intelligence efforts in France and the work of Free French agents operating across Europe, she uncovers something that could hold disastrous consequences for all involved in the case.

A series of possible attacks on British pilots lead Jacqueline Winspear’s beloved heroine Maisie Dobbs into a mystery involving First Lady Eleanor Roosevelt. To guarantee the safety of the First Lady–and of the soldier being held in police custody–Maisie must uncover the connection between them, while at the same time struggling with Anna, her young daughter who has her own struggles in the same war.

Jacqueline Winspear was born in 1955 in a small village in Kent, United Kingdom, where she grew up.

After graduating from the University of London’s Institute of Education, since the teaching market was flooded, she started working as a flight attendant as she wanted to see the world.

In 1990 she moved to the US, where she began working as a professional and personal coach. It was during this time that she became again interested in writing books (her childhood dream), and the topic of WWI became a natural choice since Jacqueline’s grandfather had fought and was severely wounded in that horrible war.

The author has also written several articles in women’s magazines on topics evolving around international education.

A full-time author, she is currently living in the San Francisco Bay Area, however, she takes often trips to the UK each year, where she visits her parents in Sussex.

Birds of a Feather

The Mapping of Love and Death

5 Responses to “List of Jacqueline Winspear Books In Order”