Last Updated on October 3, 2019  Deborah Crombie is the author of the popular Duncan Kincaid & Gemma James mystery series which currently includes 16 books, with the latest book Garden of Lamentations published in 2017.

Here is the Deborah Crombie book list for the Duncan Kincaid series in reading order with the dates of publication listed next to each book. A well worth series worth starting, if you love British crime mystery/thriller genres. 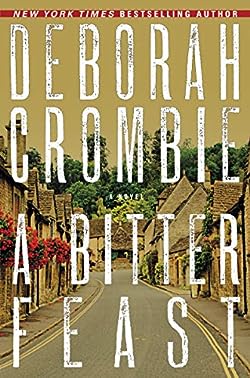 Deborah Crombie was born in Dallas. She started college as a history major, however, eventually she graduated with a degree in biology. Back then she never thought she would end up becoming a bestselling author. After graduating from college, her parents took her to the UK as a graduation gift.

Shortly after, Deborah met her Scottish boyfriend in the US and together moved to the UK. and then moved back to the US to Texas. After 14 years, the two divorced, and a year later she married Rick, her first love and boyfriend (who was, in fact, the one who introduced Deborah to Peter, who would become her first husband).

After a trip to the UK, she got the idea and spark for creating her series featuring the two British main characters in her popular crime mystery series.

Deborah Crombie lives in McKinney, Texas with her husband, two dogs (German Shepherd), and two cats. She often travels to Britain to research her books. She is now working on her 18th novel.

I love the Ducan Kinkaid/Gemma James series and I’m really looking forward to the latest one, which hopefully is published next year. The setting and storylines remind me somewhat of the writings of Agatha Christie, P.D. James, and Elizabeth George.

The two main characters of the Deborah Crombie books are Duncan Kincaid and Gemma Jame. One is a Scotland Yard superintendent and the second a sergeant. Both are located in London. They are both not only well fleshed out, but very interesting to read about and to follow their character progression and relationship development (ending in marriage). Often she mentions that her true home is in the UK and not in the US.

Deborah Crombie loves doing research for her novels and given her background and education, she is a curious person by nature and loves doing research, overall. For her books, she researches new geographical areas, as well as new topics, such as rowing and rock guitar. In addition, the author visits England (especially London) every year a few times per year without fail, where she spends three, four weeks per session to do research for her next book and even start its first draft. Thus, she can easily work with the English setting for her popular characters.

If you start the series now, I suggest reading the Deborah Crombie books in order beginning with the first book, A Share In Death and working your way through the rest. Only then you can fully experience everything the author has to offer and really connect with the two main characters and the many others (such as Doug and Melody) associated with them. Also, the character relationships grow and evolve from book to book.

For example, Duncan has become more prepared to engage emotionally and take such risks. Gemma and Duncan start out by being partners by trade, but as each character grew and evolved from book to book, we got to see their relationship become more personal as well. At some point, Gemma got promoted to detective inspector, which meant that the two could no longer work together professionally.

The Deborah Crombie books are a mix of traditional crime mysteries, police procedurals and character, and plot-driven stories. The author hates the term “psychological thrillers”, so we won’t be using it here (although there is a lot of character psychology involved in her novels).

The author noted that it took her two years to write Garden of Lamentations. When she finished writing it, it ended up being 650 pages, which got chopped a bit by her trusted editor. The book is written from several points of view, helping us learn more and more about several of our favorite characters from the popular series.

The Deborah Crombie books have been given several nominations and have won more than one awards. A Share in Death, the author’s debut novel was nominated for the Agatha and Macavity awards for the Best First Novel of 1993.

At this time, we don’t know yet what a new Deborah Crombie book would entail, but a recent interview led us to believe that it would take place at the Cotswolds since the author has visited that place recently and loved it.

As to reading the Deborah Crombie books in order, it is not absolutely necessary. The author weaves enough murder cases within the books to keep any reader occupied. The common thread between the main character is usually not the most important aspect of the book. Also, each book has enough background on the characters that the reader can jump to reading any book in the series without feeling hindered. However, personally, I still prefer reading my series in order. It just feels more natural to me.