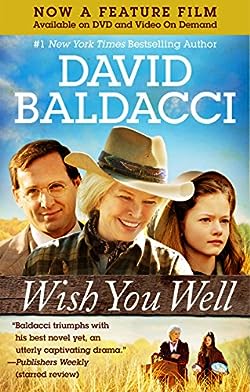 Tragedy strikes the New York-based Cardinal family when their car is involved in a terrible accident. Twelve-year-old Lou and seven-year-old Oz survive, but the crash leaves their father dead and their mother in a coma. It would seem their world has been shattered forever until their great-grandmother, Louisa Mae, agrees to raise the children on her Virginia mountain farm.

But before long their rural idyll is threatened by the discovery of natural gas on the mountain. Determined to protect her home from the ravages of big business Louisa Mae refuses to sell, but when neighbours hear of the potential wealth the company could bring they begin to turn against her. And now the Cardinal family find themselves ensnared in another battle, to be played out in a crowded Virginia courtroom: a battle for justice, for survival, and for the right to stay together in the only place they know as home.

Filled with both rich humour and desperate poignancy Wish You Well is a tale of family, faith, humanity and prejudice, set against the magical backdrop of the Virginia high rock.