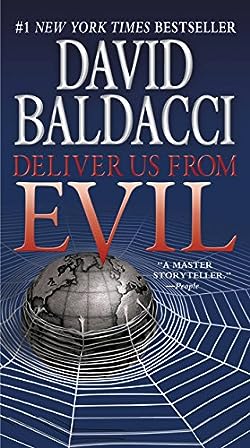 Deliver Us From Evil

In South America a wealthy ninety-six year old man reads a book late into the night. Within an hour, he is dead, the secrets of his past starkly revealed.

Six months later, in Provence, Shaw – the shadowy operative from The Whole Truth – witnesses the murder of a mysterious man, his body left lifeless at the bottom of a pool. Shaw barely escapes the incident himself; and with a new partner in tow, begins to realise that there has to be another organization at work that rivals his own in secrecy.

Meanwhile, half a world away, journalist Katie James is working on a story of international importance. But shortly after meeting with a potential inside source she is smuggled unconscious onto an aeroplane, headed to an undisclosed destination.

In the days to come, Katie and Shaw will be reunited in a deadly dual of nerve and wits against a surprising, secretive enemy and lead around the world at a breakneck pace. Filled with the breathtaking plot turns and remarkable characters that only David Baldacci can deliver, this is the author’s one of most explosive thrillers to date.