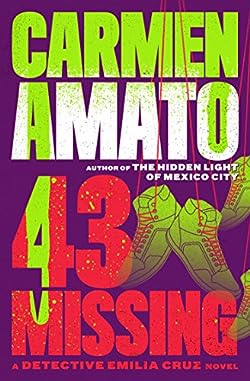 43 MISSING is based on the true events of September 2014, when 43 male students from the Ayotzinapa Rural Teachers’ College went missing in Iguala, Guerrero and have yet to be found.

Given the choice between resigning from the squad room in Acapulco or taking a new assignment, Detective Emilia Cruz finds herself on a national task force examining Mexico’s most notorious crime.

After 18 months and three inconclusive investigations, the task force is the Mexican government’s last attempt to discover what happened to 43 students who disappeared after being seized by police in a small southern city.

Despite its problems, the task force gives Emilia the opportunity to search for the rapist and murderer known as El Acólito, with whom she has an agonizing family tie. Digging into his past life in Mexico City, she’ll learn a shocking truth about the man she’s determined to kill.

As the task force digs up confusing new leads, a diplomat from the United States embassy offers Emilia $50,000 to end the investigation. It’s a tempting offer that would shift Emilia’s hunt for El Acólito into high gear.

But is the diplomat really who he claims to be?

When the task force heads to the scene of the crime, Emilia knows her loyalty, conscience, and very future will be put to the test.