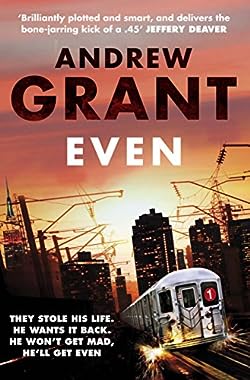 David Trevellyan is a Royal Navy intelligence operative who usually works undercover, sometimes with the approval of his masters—and sometimes not. On a seemingly normal evening, he takes a lonely late-night walk between a restaurant and his New York City hotel. A familiar huddled shape in the mouth of an alley catches his eye—a homeless man has been shot to death. Trevellyan steps forward…and a cop car arrives. A split second too late, Trevellyan realizes he’s been set up.

But Trevellyan isn’t worried. He’s a hard man from the shadowy world of Royal Navy Intelligence. He’s been in and out of trouble a thousand times before. But the NYPD quickly hands the problem to the FBI. Trevellyan is sucked deeper into the system. And the British Consulate tells him: You’re on your own now, mate.

With no idea who’s a friend and who’s a foe, he penetrates deep into a huge international conspiracy. The price of failure will be death, and the reward for success will be redemption, both for himself and the huddled corpse from the alley. The motivation will be his cherished life-long belief: You don’t get mad—you get EVEN.

If Jack Reacher had a younger brother, he’d be David Trevellyan. Lee Child does have a younger brother, and his name is Andrew Grant. A remarkable debut, Even delivers on its own—a tight, fast-paced, modern thriller fueled by adrenaline and revenge.