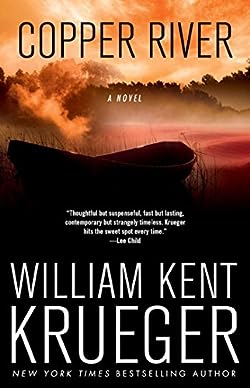 In “Copper River,” Cork is running for his life — and straight into a murderous conspiracy involving teenage runaways. Desperately avoiding the clutches of professional hit men who have already put a bullet in his leg, Cork finds sanctuary outside the small Michigan town of Bodine.

But while he’s hiding out in an old resort owned by his cousin Jewell DuBois, a bitter widow with a fourteen-year-old son named Ren, the body of a young girl surfaces along the banks of the Copper River — and then another teenager vanishes. Now, Cork must choose between helping to solve these deadly mysteries and thwarting the hit men who draw closer to him with every hour.

Instead of thwarting his assassins, Cork focuses on tracking a ring of killers who prey on innocent children — before anyone else falls victim. But as his deadly followers close in, Cork realizes he’s made an error any good man might make — and it may be his last.