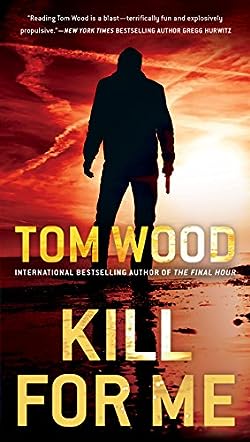 Book #8 in the Victor the Assassin series (published 2018)

For years, two sisters have vied for the turf of their dead crime boss father. Across the streets of Guatemala City, bodies have piled up; the US Drug Enforcement Agency, operating far from its own borders, is powerless to stop the fighting.

But now one sister has a weapon that could finally win the war – a cold, amoral hitman known, fittingly, as ‘Victor’.

Victor is the killer who always delivers…for the right price. And Heloise Espinosa, patron of Guatemala’s largest cartel, is ready and willing to pay him just that to eliminate the competition–her sister. Heloise has been battling Maria for control of the cartel in an endless and bloody war. Now Victor decides who survives. An easy job if it weren’t for the sudden target on his back.

Victor’s not the only one on the hunt. Someone else has Maria in their crosshairs and will do anything to get the kill. In the middle of cartel territory with enemies closing in from all sides, Victor must decide where to put the bullet before one is placed in his head. His only chance at survival is to team up with the one person who may be as deadly as he is…