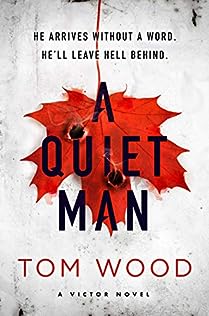 Book 9 in the Victor The Assassin series
published 2021

One day a man arrives in town. Unassuming. Quiet.

The assassin known as Victor is hiding out in a small motel in Canada after a job across the border. A few days laying low and he’ll be gone and leave no trace behind.

He doesn’t count on getting to know a mother and her boy who reminds him of his own troubled childhood when he befriends the young boy, Joshua and his mother Michelle, who works there. When both vanish, only Victor seems to notice.

Once he starts looking for them, he finds himself at odds with the criminals who own the town. They want him gone. Only Victor’s going nowhere until he discovers the truth and to them, he’s just a quiet man asking the wrong questions.

But that quiet man is a dangerous man.

The action-packed, gripping, twisty new Victor thriller from bestseller Tom Wood is his best yet, and sees the mysterious assassin search for a missing mother and her child in a town full of secrets.