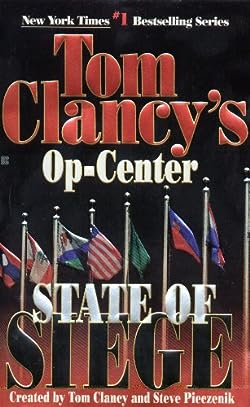 When – wherever in the world – a conflict threatens to grow into a global crisis, Op-Center comes into action. Under nerve-racking circumstances director Paul Hood coordinates the interaction between the computer center and the field team. Military lightning operations on the spot, recorded by the most advanced computer technology in the world.

Driven by greed, a group of U.N. peacekeeping soldiers becomes involved in activities on the wrong side of the law. When their tour of duty ends, the mayhem begins. Calling themselves the “Keepers,” the rogue soldiers — outfitted with stolen U.N. arms and ammunition — devise a shocking scheme to get the world’s attention… Meanwhile, Op-Center head Paul Hood has cleared out his desk.

But his retirement is short-lived. Demanding one hundred million dollars in ransom, the Keepers have taken over the U.N. — where ambassadors from ten nations have gathered for a gala function at which Hood’s daughter will perform. This time the Keepers have made it personal. And the Op-Center forces will strike with deadly vengeance..