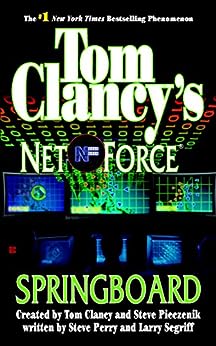 It is 2014. When a top-secret Pentagon war-game is shut down, only Net Force has the expertise to track down the hacker. The Department of Defense decides to strike while the iron is hot – and takes over Net Force. Focusing on the Pentagon’s problem, Net Force operatives track the attack to an officer in the People’s Liberation Army of China.

Based in Macao, General Wu would like to destroy the entire Internet if possible – and bring the West to its knees. As battles rage in virtual reality, Net Force sends a military strike team to Macao – to take out the general in the real world.

Someone hacked a top-secret Pentagon wargame and Cyber-Nations web site. Net Force was taken over by the Military to find the hacker.

But, this investigation is too big for Net Force and they are forced to work with members of Cybernation, the virtual reality nation which has opposed Net Force in the past.

At the same time several threads are unfolding, a bit similar to what Clancy did in his Jack Ryan books.