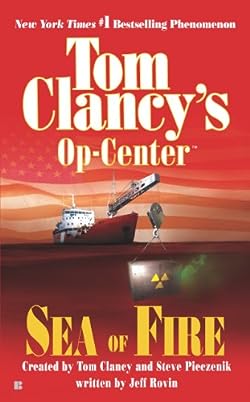 The latest Op Center book finds the team hunting for someone who is stealing nuclear waste from both the Australians and Singapore. The trail seems to link back to a politically connected Australian Billionaire.

A half-dead Singapore pirate is plucked from the Celebes Sea in the Western Pacific, setting off alarms halfway around the world in Washington, D.C. Traces of radiation are found on the man, causing Australian officials to call in Op-Center for a top-secret investigation of nuclear disposal sites.

When an empty drum from a recent drop-off is discovered near where the priate’s ship was destroyed, the Op-Center team comes to a terrifying conclusion: a multi-national corporation hired to dispose of nuclear waste is selling it instead — to a most unlikely terrorist …