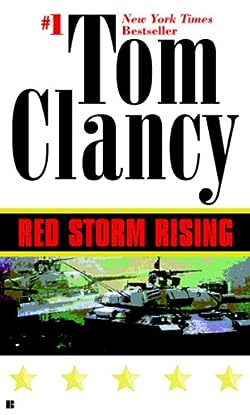 Using the latest advancements in military technology, the world’s superpowers battle it out on land, sea, and air for the ultimate global control.
A chillingly authentic vision of modern war, Red Storm Rising is as powerful as it is ambitious.

It’s a story you will never forget. Hard hitting. Suspenseful. And frighteningly real.

“Allah!”
With that shrill cry, three Muslim terrorists blow up a key Soviet oil complex, creating a critical oil shortage that threatens the stability of the USSR.

To offer the effects of this disaster, members of the Politburo and the KGB devise a brilliant plan of diplomatic trickery – a sequence of events designed to pit the NATO allies against each other – a distraction calculated to enable the Soviets to seize all the oil in the Persian Gulf.

But as this spellbinding story of international intrigue and global politics nears its climax, the Soviets are faced with another prospect, one they hadn’t planned on: a full-scale conflict in which nobody can win.