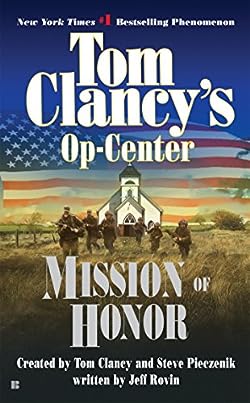 The Ops-Center team faces untold chaos on a mission in Africa in the ninth novel in the #1 New York Times bestselling series created by Tom Clancy and former Department of State official Steve Pieczenik.

On the surface it seems a simple case: a group of African militiamen have kidnapped a priest and ordered all Catholic missionaries to leave the nation of Botswana. But the Vatican thinks otherwise. At its urging, Op-Center investigates—and finds out that the real purpose of the crime is a plan by outside forces to destabilize the government and seize the nation’s diamond mines.

With its military team, Striker, out of commission, Op-Center must reinvent itself—and head straight into the crossfire of an African war. A nice job for the Op-Center team, but that gives internal problems: the Striker military team has been put out of action.