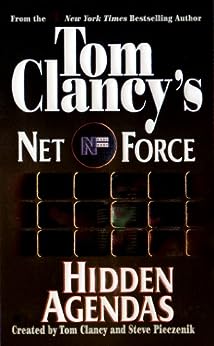 In the year 2010, computers are the new superpowers. Those who control them, control the world. To enforce the Net Laws, Congress creates the ultimate computer security agency within the FBI: the Net Force.

A list of every U.S. spy in the Euro-Asian theater … the movements of rival drug cartels … Someone with access to classified information is posting it on the Internet — and it’s costing lives. Net Force Commander Alex Michaels is in the hot seat. Now, before a hostile Senate committee, he must justify the very existence of the Net Force.

Meanwhile, a virus is unleashed that throws the federal financial systems into chaos. And the Net Force operatives must hunt the wily hacker through the twists and turns of cyberspace — down a path that leads them dangerously close to home …

In a bomb attack, a government building in Louisiana is completely destroyed. The explosion is caused by RQX-71, a chemical product used for the manufacture of cruise missiles, the composition of which is top military. But this bomb was made by a 16-year-old boy, who just took the formula off the internet …

A powerful examination of America’s defense and intelligence systems of the future, Tom Clancy’s Net Force is the creation of Tom Clancy and Steve Pieczenik, inspiring this novel and the explosive ABC television mini-series.