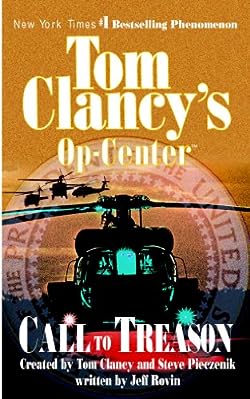 Tom Clancy’s Op-Center: Call to Treason is yet another gripping addition to the bestselling series masterminded by Tom Clancy and Steve Pieczenik.

The Op-Center’s budget is slashed, leaving General Mike Rodgers in the market for a new job. When presidential candidiate Senator Donald Orr recruits Rodgers to act as his military advisor, it sounds like a perfect transition. There’s just one problem. A spree of deaths may be tied to Orr’s presidential run and Rodgers must decide whether to sign on or shut it down.

After years of fending off challenges from the world’s most dangerous terrorists, Op-Centre has been brought to heel by the US Congress. A short-sighted committee has cut Paul Hood’s budget, and the first victim is his friend Mike Rodgers.

But General Rodgers may not be looking for work for very long. Dynamic Senator Donald Orr is making a run for President at the head of his own third party. Running on a platform of extreme isolationism, Orr presents a real challenge to the two-party system, and he needs a strong military advisor to make his team complete. The problem is that Orr may be involved in more than just ordinary political intrigue. The bodies of two murdered millionaires may be tied into the new party, and Op-Centre is seeking the killer.