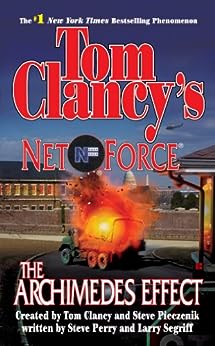 Bypassing all safeguards, terrorists enter Fort Stephens, the newest high-tech Army base, and detonate a truck full of powerful explosives. Within hours, other bases are hit. Under attack, the Army calls in Net Force to help.

After a couple of military bases are hit by a group of mercenaries who seem to know all the security details and codes, Jay Gridley discovers that the military specs for the bases were incorporated into a widely distributed game, and the results of successful attempts to penetrate the bases in the game were relayed back to the owner.

Teaming up with Army intelligence and the National Guard, Net Force’s own crack troops struggle to track down who is behind the deadly attacks. But they are countered at every move by a cunning opponent who thinks just like one of their own.

As an aside, Thorn resigns at the end of this one, and speculates that Gridley and Kent are on their way out, too.