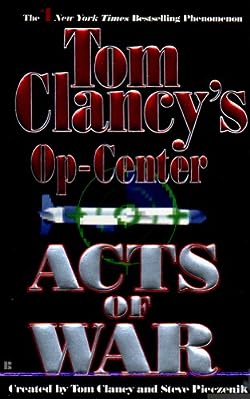 In Tom Clancy’s all-new, original novel, OP-CENTER: Acts of War, Syrian terrorists have attacked a dam inside the borders of Turkey, threatening the water supply of their very homeland. It is not insanity, but the first step in a deceptively simple plan: to force all-out war in the Middle East.

Syrian terrorists are destroying a dam in Turkey, putting the drinking water supply in their own homeland at risk. This seems like crazy action, but is in fact nothing more than the first step in a well-considered plan: the eliciting of total war in the Middle East.

But what the terrorists do not know is that a Regional Op-Center has recently started operating in Greece. This ROC is a mobile version of the permanent crisis management center and a constantly vigilant and infallible source of information. It is exactly what the Syrian rebels are in their shield.

But the terrorists have more than expected. They too have their methods to obtain secret information. And the ROC – this newest toy from the US – is a great prize …