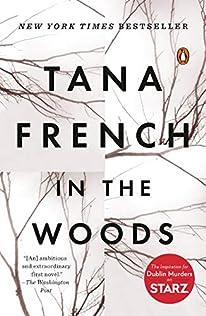 A gorgeously written novel that marks the debut of an astonishing new voice in psychological suspense.

Twenty years on, Rob Ryan – the child who came back – is a detective in the Dublin police force. He’s changed his name. No one knows about his past. Even he has no memory of what happened that day.

Then, a little girl’s body is found at the site of the old tragedy and Rob is drawn back into the mystery. For him and his DI partner, Cassie, every lead comes with its own sinister undercurrents. The victim’s apparently normal family is hiding layers of secrets. Rob’s own private enquiries are taking a toll on his mind. And every trail leads inexorably back…into the woods

As dusk approaches a small Dublin suburb in the summer of 1984, mothers begin to call their children home. But on this warm evening, three children do not return from the dark and silent woods. When the police arrive, they find only one of the children. He is gripping a tree trunk in terror, wearing blood-filled sneakers and unable to recall a single detail of the previous hours.

Twenty years later, the found boy, Rob Ryan, is a detective on the Dublin Murder Squad and keeps his past a secret. But when a 12-year-old girl is found murdered in the same woods, he and Detective Cassie Maddox (his partner and closest friend) find themselves investigating a case chillingly similar to the previous unsolved mystery. Now, with only snippets of long-buried memories to guide him, Ryan has the chance to uncover both the mystery of the case before him and that of his own shadowy past.