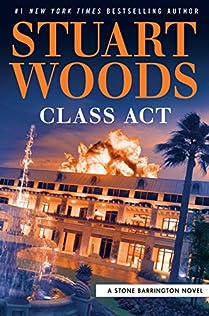 After a rocky jaunt in Maine, Stone Barrington is settling back in New York City when an old client reaches out for help with a delicate matter. A feud they thought was put to rest long ago has reemerged with a vengeance, and reputations—and money—are now on the line.

As Stone sets out to unravel a tangled web of crime and secrets, his mission becomes even more complicated when he makes an irresistible new acquaintance. In both the underbelly and upper echelons of New York, everyone has something to hide—and if Stone has learned anything, it’s that history has a way of repeating itself…

In this book, the fabulously wealthy attorney finds himself and his friends embroiled in a complicated case involving an old client who comes back into his life. The rising suspense keeps readers nailed to the plot, as does the body count. Through it all, however, Stone keeps mostly calm. But fans of Stuart Woods should be prepared for quite more sex than he usually shows, and a taste of heavier language.