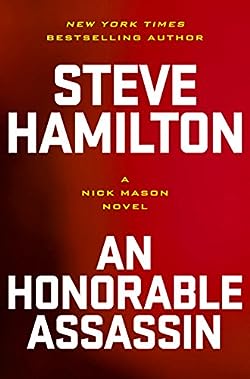 Nick Mason was released from federal prison to begin a second life as an unwilling assassin, serving a major Chicago crime lord until the day he finally won his freedom. But that freedom was a lie.

Now Mason finds himself on a plane to Jakarta, his life controlled by a vast shadow organization that can cross any international border. He leaves behind everyone he’s ever loved, everything he’s ever known… Except for one thing: The job. When his phone rings, day or night, he has to answer it, and do whatever he’s told. Mason is an exile, forced to live out a nightmare on the other side of the world – and the only way home is to keep killing.

This time his target is Hashim Baya, known to his followers as the Crocodile. A phantom money man who finances countless bloody terrorist attacks across the globe, Baya is the most dangerous criminal Mason has ever faced. But Mason’s not the only one hunting him.

For Martin Sauvage, a tough-as-nails Interpol agent, apprehending Baya has become a personal vendetta. Sauvage wants Baya in prison. Mason’s only chance at survival is to put him in a body bag. Assassin and cop are on a collision course leading to a brutal showdown. . . . and to the most shocking revelation of all.