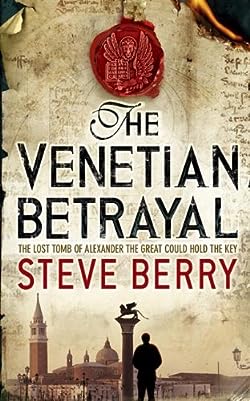 Locating Alexander the Great’s final resting place-unknown to this day-remains a tantalizing goal for both archaeologists and treasure hunters.

Now the quest for this coveted prize is about to heat up. After narrowly escaping a fire that consumes a Danish museum, Cotton Malone-former U.S. Justice Department agent turned rare-book dealer-learns from his friend, the beguiling adventurer Cassiopeia Vitt, that the blaze was part of a campaign of arson intended to mask a far more diabolical design.

From the ashes of the U.S.S.R., a new nation has arisen: the Central Asian Federation. At its helm is Supreme Minister Irina Zovastina, a cunning despot with the single-minded desire to surpass Alexander the Great as history’s ultimate conqueror.

The Federation has amassed a harrowing arsenal of biological weapons, and only one thing keeps Zovastina from setting in motion her death march of domination: a miraculous healing serum, kept secret by an ancient puzzle and buried with the mummified remains of Alexander the Great-in a tomb lost to the ages for more than 1,500 years.

Together, Cotton and Cassiopeia must outrun and outthink the forces allied against them in order to unravel a riddle whose solution could destroy or save millions of people-depending on who finds the lost tomb first.