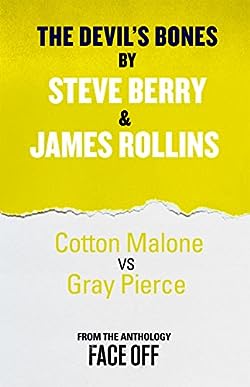 by Steve Berry and James Rollins

In this short story from the thrilling anthology FaceOff, New York Times bestselling authors Steve Berry and James Rollins—along with their popular characters Cotton Malone and Gray Pierce—team up for the first time ever.

In a visit to Copenhagen, Gray Pierce happened upon a bookshop owned by an ex-lawyer named Cotton Malone, but he never had a chance to really get to know the owner. Too bad, because they had a lot in common: Both men were ex-military, both worked for covert agencies—Malone as a freelancer under the auspices of the Justice Department; Pierce via the Department of Defense—and both are good at what they do.

Flash forward a few years to when Malone and Pierce finally get together for more than a passing hello. Halfway around the world from Denmark, Malone and Pierce are passengers on a luxury riverboat out of Brazil, both on the hunt for a maniacal botanist who’s scheming to sell the spoils of his latest Amazonian excursion—a rare orchid containing a deadly neurotoxin—to the highest bidder.

That means Malone and Pierce have the length of the riverboat cruise to stop him before the poison falls into the wrong hands.