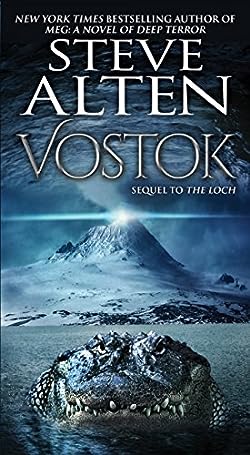 Vostok, a liquid lake that sits two-and-a-half miles below the ice cap, 6,000 square long and over 1,000 feet deep, has not been disturbed by anyone for over 15 million years. Until now.

Disgraced marine biologist Zachary Wallace decides to go 13,000 feet beneath the ice in his submersible with two other scientists on board, to discover apparently extinct Mesozoic life-forms. He took on a six-month project of an adventure in the Antarctic, one which might just prove fatal to our main hero.

When he discovers a huge magnetic anomaly deep beneath the ice, he can’t but think of crashed UFOs.

While Vostok is a sequel to The Loch, it also serves as a prequel to Nightstalkers, the latest MEG book, connecting the two series in an interesting twist. For the lovers of the MEG series it is a pleasant surprise to see Jonas Taylor and the Tanaka Institute also featuring in the book.