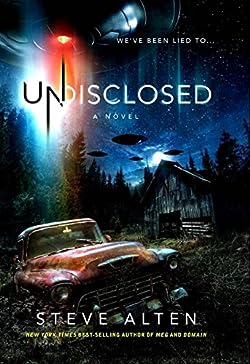 The latest standalone Steve Alten book, Undisclosed, is a contemporary adventure story. Contemporary in that it touches on the latest turbulent US presidency with all its pitfalls and dangers.

When amputee and Iraq war veteran, Adam Shariak, is appointed Under Secretary of Defense, he has no idea that the Dems have a secret plan for him. Bill Clinton himself meets Adam in secret and tells him about the role he will play in fixing the nation and bringing it back to the true people country it used to be.

Not only that, but Adam would have to uncover and bring to light, a secretly held zero-point-energy, one which could alter the world forever into what it was always meant to be: a beacon of hope and prosperity, one that even aliens could be proud of.

If you like the X-Files, conspiracy theories and hope for a better future than we have right now, then Undisclosed by Steve Alten is a must read.