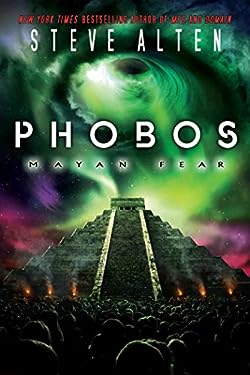 Phobos: Mayan Fear, Steve Alten’s third book in the Mayan Prophecy (Domain) trilogy, the author takes us on a roller-coaster of a journey back in time where Immanuel Gabriel meets and works with his deceased grandfather, archaeologist Julius Gabriel to save the world from Doomsday.

History has changed and now we have ancient beliefs of the Mayan, Aztec and Olmec, along with our favorite topics, time travel, science fiction and religion thrown into the mix for a delicious adventure story.

When Immanuel (Manny) meets his deceased grandfather, Julius reveals to him everything the Mayans were afraid of, all their secrets involving the Big Bang and even extraterrestrials.

As December 21st, 2012, approaches, things are getting more dire and dire, until the time is running almost out. Corruption, greed, and evil take a stronger hold on humanity, and disaster is looming on the horizon. But what if there is something even worse, another prophecy which could wipe out not only humanity but the entire planet as well?