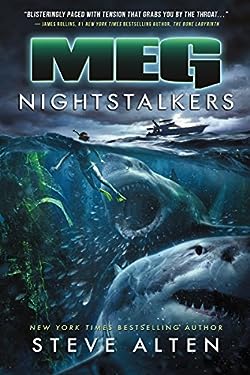 Nightstalkers takes place right after the ending of  MEG:Hell’s Aquarium.

The two remaining Megalodon pups, Bela and Lizzy, have escaped the Tanaka Institute to roam freely in the Salish Sea in British Columbia. Now Jonas has to recapture the grown pups or else kill them since he knows that two Megs mean big troubles for the human race.

David, Jonas’s son is now all grown up and has his own adventure in the book. In the previous story, he witnessed his girlfriend’s gruesome death in an attack in Dubai. So, fueled by revenge, he joins the prince’s expedition hoping that he track and capture the huge 120-foot Liopleurodon now at large who was the reason for his girlfriend’s horrible death.

With the two separate adventures of father and son, the point of view shifts from one person to the other throughout the book.

This book also introduces protagonists from Steve Alten’s separate series, The Loch, however, you don’t have to read that serious previous before continuing with Nightstalkers.

While Nightstalkers is the latest book in the MEG series, Steve Alten is working on his new MEG book to be titled Generations.