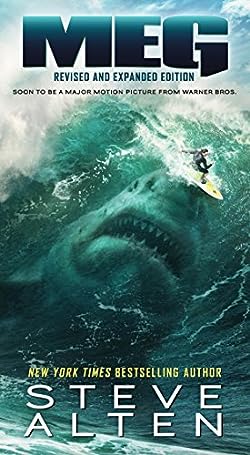 Jonas Taylor is a deep-sea expert and a ex-Navy submersible expert. Being also expert on the extinct Megalodon, he is called to check on some sensors  in the Mariana Trench that are no longer funtioning as they should.

Having already been once at the Mariana Trench, Jonas is not excited about a second trip there. During the first trip, several of his colleagues died due to him freaking out by something weird in the sea. Now, Jonas is considered a pariah in the relevant circles and is no longer asked to deep explore. All he does is lecture about it and write his conclusions that MEG is definitely not extinct.

But now, he is aked once again to do into the deep, this time by a wealthy guy who wants him to check on the sensors. And now Taylor’s second trip into the abys starts. And with it, the popular adventure series MEG.

Meg is turned into a movie starring Jason Statham in August 2018.