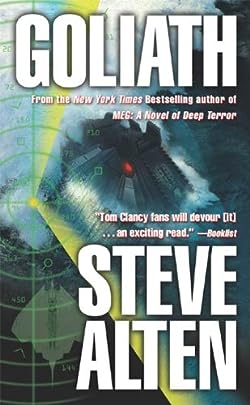 When terrorists capture a new modern military submarine called Goliath and threaten to unleash hell on earth unless oppressive regimes and nuclear weapons are forever banished from the arsenals of main players in the world, all things seem lost until A.I.

Yes, the sub’s bio-computer, SORCERESS, becomes self-aware and decides to take things into its own hands, with its own agenda.

Commander Rochelle “Rocky” Jackson, who helped design Goliath thought that the vessel was destroyed. Yet, here it was, in the hands of the Chinese until it was hijacked by none other than Russian computer genius Simon Bela Covah, who once served under Rocky herself.

Now Rocky and her ex-fiance, Gunner, are tasked to stop Covah by any means necessary before it’s too late. The two have a loaded history and don’t particularly trust each other, but they have to put their differences aside if they want to stop Covah from unleashing Armageddon on Earth and take back ownership of the ever-evolving Goliath.