Last Updated on July 1, 2019  Here are the Stephen Hunter books in order for his Bob Lee Swagger series and the rest of his fiction and non-fiction work. The books are all listed in publication order with the chronological order in brackets next to each book. 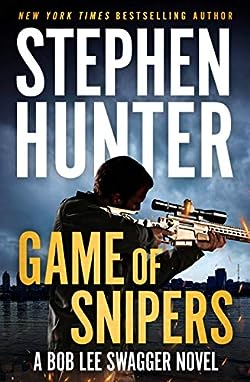 Born in 1946 in Kansas City, Missouri, Stephen Hunter grew up in Evanston, Illinois.

He always wanted to be a writer. In school, he was never a good athlete and would not excel at most topics except for creative writing, where the teacher would always pick his assignments to read in class.

This formed Stephen in a way that he would become a best-selling author a few years from then. It would give him an identity and a purpose for his later work.

He went to the Northwestern University – Medill School of Journalism, from where in 1968 he graduated with a degree in journalism. Incidentally, this is the same university where his dad used to teach speech before he was killed in 1975.

After his graduation, he went to the army being drafted for 2 years and served as a ceremonial soldier in Washington, D.C., where he, later on, worked as a journalist for Pentagon News, a military newspaper.

In 1971 Stephen Hunter got a job as a journalist at the Baltimore Sun, where he worked at the copy desk for the next 10 years. In 1982 he became a chief film critic for the same magazine, staying in this position for the following 16 years.

While working as a journalist, Stephen Hunter also started writing his first books. His debut novel is a standalone novel titled The Master Sniper, which he published in 1980. He then followed up with several other standalone books until Point of Impact, the first in the Bob Lee Swagger military thriller series was published in 1993. In fact, the author Stephen Hunter managed to write approximately one book per year ever since.

Knowing about Bob Lee Swagger’s love for firearms, it is not surprising to learn that Stephen Hunter loves firearms as well. He is, in fact, a hobbyist shooter.

In 2008 Stephen Hunter has retired from his film critic job, after having worked in the newspaper business for 38 years, and is now writing full time. So far there are over 20 Stephen Hunter books published to date, not counting the author’s non-fiction work.

In 2007 Point Of Impact became a successful movie titled Shooter featuring Mark Wahlberg. In 2016 it was further made into a TV show titled Shooter, featuring Ryan Phillippe.

The series currently includes 11 books, with the latest one titled Game of Snipers which was published in 2019.

The Bob Lee Swagger series led to two additional spin-off series, one written about Bob’s father Earl, which contains 3 books, and one about his son, Ray Cruz.

In addition to his thriller novels, the author has also written three non-fiction books, all on political and military topics.