Last Updated on August 2, 2019 Stephen Booth is well known for his Ben Cooper & Diane Fry series, which currently includes 18 books, with the latest one titled Fall Down Dead. His books in order will be listed below chronologically.

The British author is well known among lovers of mystery novels, and his Cooper & Fry series has been a favorite of many who enjoy murder mystery novels involving couples or partners who solve crimes. I’ve read his first novel many years ago and decided to catch up to the rest of the books in the series because I really enjoyed Ben’s character.

So here are the Stephen Booth books in order of reading from the first to the currently last. 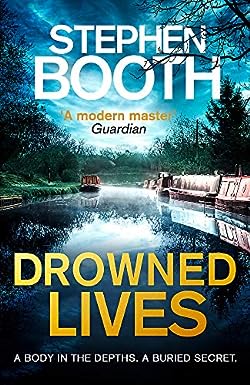 Should we read the Stephen Booth books in order?

This is a series that I sort of read out of order and I didn’t feel much the need to leave a book and go back to a previous one just to catch up. The author gives background from earlier books in any newer ones, so I think starting the series with any book should not confuse anyone much.

Having said that, however, I do recommend starting with the first book and continuing the Cooper and Fry mysteries in order, just to really understand the interaction and chemistry between the two main characters. If I had to start the series from scratch, I’d definitely tackle them one by one in the right chronological order.

One note about reading the books in order: I haven’t read yet the latest book  Already Dead, however many readers recommend reading first Dead and Buried because one follows directly the storyline from the previous one.

Stephen Booth (website) was born in 1952 in Burnley, Lancashire, UK. Very early in his life, at the age of 2, he moved with his family to Blackpool, Lancashire, where he also attended the local Arnold School. At the age of 12 he wrote his first novel.

After leaving school, following his graduation from City of Birmingham Polytechnic, he moved to Manchester to become a teacher, something that eventually didn’t pursue any longer. Next, in 1974, he started working as a journalist for several newspapers and magazines around the country, among them being the Wilmslow Advertiser, Huddersfield Examiner, and the Worksop Guardian. He also worked for various local newspapers around the area. For a while, he also worked as a sub-editor for the popular Daily Express and The Guardian newspaper.

When in 1999 he was shortlisted for various awards and even received the Lichfield Prize for an unpublished novel, following which he signed a contract with HarperCollins for the first two books in a new series, he knew that his path would soon take him away from journalism and towards a new career altogether.

In 2001 he left his day job completely to focus on writing books full time after his debut novel, Black Dog, which was published in 2000, really took off. The book won the Barry Awards for Best British Crime and was also nominated for the Anthony Award for Best First Mystery.

Success followed the author ever since, many of the Stephen Booth books either winning or being nominated for various awards and earning lots of praise both from critics and readers alike. In the UK, the series is released by Little, Brown, while in the US HarperCollins is still publishing the author’s novels through their Witness Impulse Imprint.

Stephen Booth’s books are pretty much written in the British style of slower action paced novels. However, that hasn’t put me off from reading the books. They’re perfect for those lazy evenings of winter weekends when you want to read something relaxing – yet engaging – on your couch with a glass of your favorite drink sitting on a nearby table.

There is a strange interaction between the two main characters, Ben Cooper and his boss Diane. The author goes in-depth in developing the characters with all their entangled emotions, and he doesn’t glaze over them just to get the story going. And this is something I appreciate – the real 3 dimension of the characters – even with the sometimes annoying traits of Diane.

That’s what makes her – and him – real in our eyes. Diane is far from being a social person, she’s really a recluse, and definitely a people’s person, which makes it interesting to watch her being the boss around there.

Besides the characters, Stephen Booth knows how to evoke an ambient in his novels. Sometimes you find yourself reading pages of descriptions, and while this is something I’d just flip the pages over in another novel, here these atmospheric descriptions work quite well.

As for the plot, I found in most books that it moves along quite well. All in all, I highly recommend this series for anyone who wants to read a good, solid British mystery series.

Stephen Booth and his wife, Lesley, live in a village in Nottinghamshire in England along with their three cats. He is currently working on his next book.