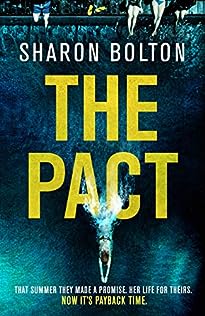 A golden summer, and six talented friends are looking forward to the brightest of futures – until a daredevil game goes horribly wrong, and a woman and two children are killed.

Felix, Xav, Amber, Talitha, Megan, and Dan have just finished their A-Levels, are waiting for their exam results, and all have bright futures ahead of them, as they are all expected to go to Oxford and Cambridge Universities…Until one summer night when a dangerous drinking, taking drugs, and drunk driving game goes wrong and a woman and her two children end up dead.

18-year-old Megan takes the blame, leaving the others free to get on with their lives. In return, they each agree to a ‘favour’, payable on her release from prison. The ‘favour’ is to do whatever she asks them each, and in case they go back on the deal, she will tell the truth about what had happened that night. Meanwhile,  the five friends have moved on and Megan has been almost forgotten

Twenty years later Megan is free. Let the games begin . . . We catch up with Dan, Felix, Tal, Xav and Amber, now all adults with successful careers, some married and some with children.

Richard & Judy bestseller Sharon Bolton is back, with her twistiest thriller yet.