Last Updated on May 10, 2021 Sharon Bolton (aka S.J. Bolton, aka Sharon J. Bolton) is the British author of the popular Lacey Flint series, as well as her several standalone thriller novels.

Reading the Sharon Bolton books in order especially for the Lacey Flint series is an unforgettable experience.  The series is one of the strongest, most chilling set of thrillers I have recently read. A very complex character, Lacey is a police officer with a past which she’d like hidden forever.

Here are all the Sharon Bolton books in order both for her Lacey Flint series and her standalone novels. 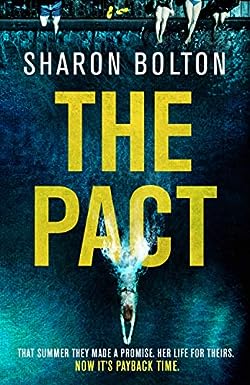 Sharon Bolton was born in 1960 in Lancashire,  in the North of England. At some point in her life, Sharon Bolton worked for the National Rivers Authority (later The Environment Agency).

The author’s background reminded me strongly of her book A Dark and Twisted Tide and the novella Here Be Dragons, where water features in the Lacey Flint series. Both Lacey and Mark Joesbury know to navigate the Thames, and I have a feeling that some of the author’s knowledge about the water, tides and what lurks beneath has seeped into her books as well.

Born and brought up in Lancashire, Sharon Bolton is now living her husband and son in a village in the Chiltern Hills, close to Oxford.

She studied drama at the university, following her childhood dream of becoming an actress and dancer. After graduating, she started performing for a while at the Edinburgh Fringe Festival.

Her next career path took Sharon to the world of marketing and PR, which eventually she left, along the big city she was living in to start a family, become a full time mom and writer (and all the Lacey Flint readers thank you for making this decision, as without it there might have never been created this series that we love so much).

Her childhood dream was never writing in the first place, so she picked up the pen and paper (well, laptop, really) relatively late in her life to start writing books.

Her first novel was a romantic suspense story and she was pretty surprised as well as how easy the words were flowing from her mind to the laptop screen. The book, Sacrifice, was turned into a movie in 2016 featuring Rupert Graves, Radha Mitchell, and David Robb.

Sharon Bolton’s books earned the author several awards, including Mary Higgins Clark in 2010 for Awakening, and the Crime Writers Association (CWA) Dagger Award for her writing overall. Blood Harvest was also shortlisted by CWA in 2010.

While the author’s novels are great books in their own right, her Lacey Flint series is a level well-above cut. When I first read Now You See Me, I was hooked from the first pages.

It was a hard book with a hard heroine, one that kept my attention throughout. Lacey has a sharp mind, strong wit and very good at her job. A detective constable with the London Metropolitan Police, she often gets the big cases the police gets on their desk.

Lacey often has to go around her superiors to solve her difficult cases. To solver her tough cases, she more often than not relies on her very accurate gut instinct that tells her what to do in those very dire moments when her life or that of others can be in serious danger.