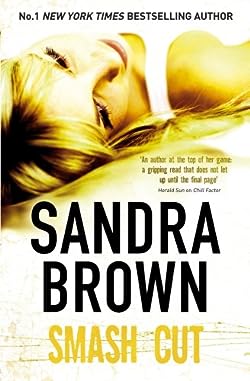 In film, a smash cut is exactly what the term suggests: a technique where one scene cuts abruptly to another without transition, thus startling the viewer. As in movies, Sandra Brown’s Smash Cut uses this device to heighten tension and intensify suspense. The author of Long Time Coming, The Breath of Scandal, and Smoke Screen delivers another novel of romance, surprises, and sweet twists of fate.

From #1 New York Times bestselling author Sandra Brown comes this thrilling new novel full of jarring, cinematic twists and breathless suspense that will have you on the edge of your seat.

When millionaire Paul Wheeler is murdered, his family retains renowned lawyer Derek Mitchell to defend the victim’s nephew Creighton— although the police have not charged the young man with the crime. Wheeler’s mistress, Julie Rutledge, who is also a suspect, believes that Creighton is the killer, despite his rock-solid alibi, and she’ll do almost anything in her quest to prove his guilt—even ruin Derek’s career.

But the more Derek learns of Creighton’s darker side, especially his bizarre fascination with movie murders, the more he comes to believe Julie is right. The clock ticks down to a shocking ending as Derek and Julie join forces to find the truth. Has Creighton begun reenacting cinema’s goriest scenes? And who will be his unwilling costars?