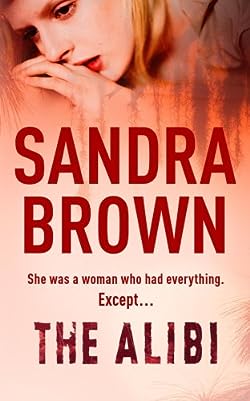 Sandra Brown’s two previous novels, Unspeakable and Fat Tuesday, earned her a loyal band of romantic suspense fans and The Alibi is sure to increase the following. Mixing a little murder, some corruption, and a good bit of illicit romance, this novel makes the golf courses of Charleston, South Carolina, seem as seedy and fascinating as the back alleys of Chinatown.

Hammond Cross sees a beautiful woman across a crowded dance floor and knows he has to be with her. After they spend the night together, she mysteriously disappears. Later, while prosecuting the biggest murder case of his career, Hammond discovers that Dr. Alex Ladd, the prime suspect, is also his mystery woman.

Now, he faces a moral dilemma and a haunting question. Is she innocent of the crime or was he used as her perfect alibi? And if she isn’t the killer, is she the next victim?

Brown’s quick dialogue, character quirks, and plot twists help give a modern bent to the classic detective tale. While some of the characters prance across the pages with a predictability that would make Dashiell Hammett proud (the drunk-makes-good assistant, the light-hair-dark-history socialite) most of the characters show refreshing individuality. As Hammond’s internal conflict intensifies–and the passion and danger do, too–readers will find all criticisms vanishing as they blast their way through this suspenseful page-turner.