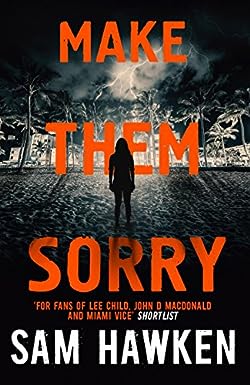 Camaro Espinoza’s life in Miami is pretty normal: Piloting charter fishing trips, fighting at the gym, drinking heavily at the bar. But there are two minor annoyances for Camaro, a loner by nature-annoyances named Ignacio Montellano, homicide detective, who wants Camaro to keep a low profile; and Faith Glazer, an accountant with a stalker, who wants Camaro’s help in learning self-defense.

When the stalker’s escalating behavior turns confrontational, Faith is prepared to defend herself. But this wasn’t a run-of-the-mill stalker, it turns out: he’s been sent by someone who wants Faith dead. Neither Camaro nor Montellano really trusts the other, they each launch their own investigations. The more they learn, the more dangerous things get: federal informants, money-launderers, drug cartels, and worse.

But when danger calls, the “female Jack Reacher” (The Toronto Star) is in her element. With each new novel, Sam Hawken’s Camaro Espinoza becomes a stronger, even more compelling character.