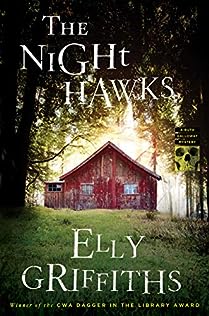 There’s nothing Ruth Galloway hates more than amateur archaeologists, but when a group of them stumble upon Bronze Age artifacts alongside a dead body, she finds herself thrust into their midst—and into the crosshairs of a string of murders circling ever closer.

The Night Hawks, a group of metal detectorists, are searching for buried treasure when they find a body on the beach in North Norfolk. At first Nelson thinks that the dead man might be an asylum seeker but he turns out to be a local boy, Jem Taylor, recently released from prison. Ruth is more interested in the treasure, a hoard of Bronze Age weapons. Nelson at first thinks that Taylor’s death is accidental drowning, but a second death suggests murder.

Ruth is back as head of archaeology at the University of North Norfolk when a group of local metal detectorists—the so-called Night Hawks—uncovers Bronze Age artifacts on the beach, alongside a recently deceased body, just washed ashore. Not long after, the same detectorists uncover a murder-suicide—a scientist and his wife found at their farmhouse, long thought to be haunted by the Black Shuck, a humongous black dog, a harbinger of death.

The further DCI Nelson probes into both cases, the more intertwined they become, and the closer they circle to David Brown, the new lecturer Ruth has recently hired, who seems always to turn up wherever Ruth goes.