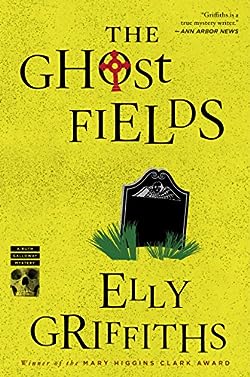 by Elly Griffiths
Book #7 in the Ruth Galloway series (2015)

It’s a blazing hot summer in Norfolk when a construction crew unearths a downed American fighter plane from World War II with a body inside.

Forensic archeologist Ruth Galloway determines that the skeleton couldn’t possibly be the pilot, and DNA tests identify the man as Fred Blackstock, a local aristocrat long presumed dead – news that seems to frighten his descendants.

Events are further complicated by a TV company that wants to make a film about Norfolk’s deserted air force bases, the so-called ghost fields, which the Blackstocks have converted into a pig farm.

As production begins, Ruth notices a mysterious man loitering at Fred Blackstock’s memorial service. Then human bones are found on the family’s pig farm and the weather quickly turns. Can the team outrace a looming flood to find the killer?