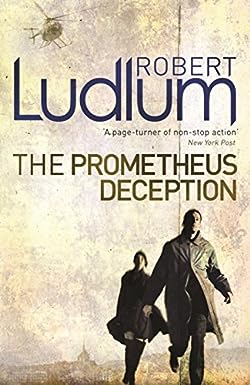 The ultimate spy. After fifteen years as a brilliant master spy, Nick Bryson has disappeared into anonymity as a professor at an exclusive college in western Pennsylvania– until he’s suddenly lured back into the game.

The ultimate threat. Recruited by the CIA, he’s been commissioned to track the moves of the Directorate. Once, the ultra-secret intelligence agency was Bryson’s training ground. Now it’s a multinational terrorist conspiracy bent on global domination.

The ultimate deception. But to eliminate the core of corruption means plunging into his own past, investigating the motives of a beautiful stranger who may be his greatest downfall, and infiltrating a secret nexus of power called Prometheus that holds the terrifying clues to his past– and the even more terrifying possibilities of the future…

With everything he thought he knew about his own life in question, Bryson is all alone in a wilderness of mirrors – unsure what is and isn’t true and who, if anyone, he can trust – with the future of millions in the balance.