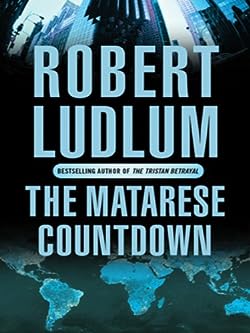 CIA case officer Cameron Pryce thought he’d crushed the deadly cabal of powerbrokers and assassins. But like a phoenix rising from the ashes, the Matarese dynasty is back. Now the countdown begins — and Pryce is already running out of time.

“The Matarese Circle, ” Robert Ludlum’s multimillion-copy spellbinder, introduced a treacherous international cabal of powerbrokers and their hired assassins. More than 20 years ago, the top CIA and KGB agents joined together to insure that, in an explosive act, the Matarese conspiracy went up in flames. But now Robert Ludlum, the unsurpassed master of suspense, returns with a stunning thriller for the 21st century. . .Secret deals are in the making, massive mysterious transactions steeped in corruption and murder.

The players stand at the highest pinnacles of global finance and government. It is an unprecedented consolidation of money, power, and ruthlessness. Their ultimate aim: worldwide economic domination and all it entails. . . by whatever means necessary. The Matarese dynasty is back in all its glory and evil. And the one man with enough knowledge to stop it, CIA case officer Cameron Pryce, may not have enough time.

The Matarese countdown has begun and Pryce’s only chance to cut it off is to follow the trail of blood money and stone-cold killers to the heart of this deadliest conspiracy.