Last Updated on January 17, 2023 Rick Mofina is a popular Canadian award winning author of crime fiction and suspense thrillers who started his writing career in earnest in 2000 with the book If Angels Fall. This is the book that got me to read everything else he has written ever since.

Here are the Rick Mofina books in order for his several crime mystery series as well as standalone books such as Missing Daughter and Her Last Goodbye, and short stories and short story collections such as A Lifetime Burning in a Moment. 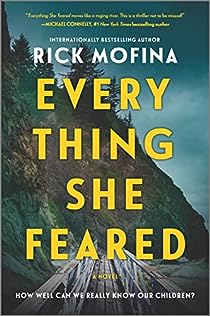 Rick Mofina Biography – About The Author

Rick Mofina grew up in Belleville, Ontario, in Canada, in a working-class family. Before writing novels, he wrote several short stories in grade school, with the first being sold at the young age of 15.

As a child, his mother encouraged the author to write stories. She even bought him his first typewriter, a portable manual Royal.

As a teenager, he had a chance to hitchhike to California, which sparked the very first of his attempts at writing about his experience, which he wrote at the age of 18, a story he never published.

Before attending university, he held various menial jobs, which included working at a horseracing track and delivering cars to California.

At the Carleton University in Ottawa, he studied American Detective fiction, English Literature, and journalism. During summer he spent his time as a rookie reporter at the Toronto Star (the same paper where also Hemingway worked at some point), propelling his way to becoming a journalist at Calgary Herald, Southern newswire service and The Ottawa Citizen, among others.

During his job as a journalist, he came across – and fact to face – with twisted serial killers on death row, where he had to cover serial killings in California, Alberta and Las Vegas. His freelance crime stories have appeared all over the world in prominent magazines and newspapers, such as The New York Times, Marie Claire, Reader’s Digest, The Moscow Times, and The South China Morning Post magazine. Such publications added several of his relevant works.

All this experience shaped what he would become later, one of our century’s most prominent crime mystery and thriller authors.

If Angels Fall is the first of Rick Mofina’s books, which I have read several years ago. It left such a strong impression that I soon found myself seeking out everything else he has written since then. If features the fearless crime reporter and SFPD Homicide Inspector who join forces to solve several cases over five books.

One of my favorite of Rick Mofina’s books in order in (my favorite so far is part of the K. Page series, Free Fall, published in 2016. The series includes four books so far. In an interview, the author mentioned that he drew inspiration for Kate’s character from several female reporters he came across during his investigative work, along with inspiration from women in other jobs, along with moms.

In Missing Daughter, published 2019, the lives of Ryan and Karen Lane change dramatically when they discover one morning that their daughter’s room window is open and the girl is missing from the house. The police investigation reveals several damning facts, and now suddenly everyone is a suspect in Maddie’s disappearance. However, there is no sign of Maddie, and the couple fears that they have lost their child for good.

In Her Last Goodbye, the book motto is Family ties run deep. Family secrets run deeper. Perfect Wife. Doting Mom. The 2022 novel features a missing mother and wife, with the husband being suspected of harming her. The abducted wife theme is quite popular in the thriller genre, and the author made sure that his contribution is top-notch.

Before writing books, Rick Mofina’s time includes a lot of research for his materials. For example, he researched avionics and read several FBI reports focusing on plane crashes in several countries. He even talked to a previous NTSB accident investigator.

Being for a long time a reporter in his daily work, the writer found it easy to do this investigative work. That’s why, that novel is tangentially also a techno-thriller, touching on highly technical elements in the book, while also maintaining the crime mystery element as well.

At the moment, he no longer works as a reporter, but still has a full-time day job in another arena of communications. Yet, he still finds time to write a book every year, much to the delight of his fans. He currently lives in Ottawa, Canada. The Rick Mofina books in order are getting more and more popular with new novels written every year.

Over the years, his books in order have been published in close to 30 countries, including an illegal translation of his thriller, If Angels Fall, produced in Iran. He is a twice-receiver of the Arthur Ellis Award, once for Best Novel in 2003, and once for Best Short Story in 2006. He was hailed as one of the best thriller writers in the business by Library Journal. Dean Koontz mentioned about the author that he wrote “a fine book series of thrillers to which Be Mine is a great addition: “swiftly paced, entertaining, with authentic details of police procedure.” In addition, Rick Mofina’s books have been lauded by prominent writers such as James Patterson, Michael Connelly, Lee Child, Tess Gerritsen, Jeffery Deaver, Sandra Brown, James Rollins, Brad Thor, Nick Stone, David Morrell, Allison Brennan, Heather Graham, Linwood Barclay, Peter Robinson, Håkan Nesser and Kay Hooper. The Crime Writers of Canada have listed his titles among some of the best in crime fiction.