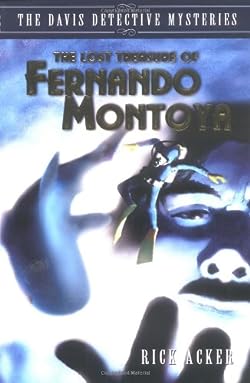 Sibling sleuths Arthur and Kirstin Davis explore treacherous gold fields, shark infested waters, and a buried ship (and those are the easy parts) to reclaim the lost treasure of Fernando Montoya.

Who would’ve guessed that a 150-year-old mystery could be so dangerous?

While the sibling sleuths of the Davis Detective agency, Arthur and Kirstin Davis, are visiting their uncle in San Francisco, a chance conversation at a baseball game puts them on the trail of 400 pounds of gold that vanished during the Gold Rush.

But the teen detectives soon discover that someone wants them off the case.

The investigation quickly becomes a harrowing adventureoexploring the treacherous old gold fields, scuba diving in the shark infested waters of the San Francisco Bay, and managing to get inside one of the buried ships.

But things really get dangerous when they finally uncover the secret of the lost treasure of Fernando Montoya.