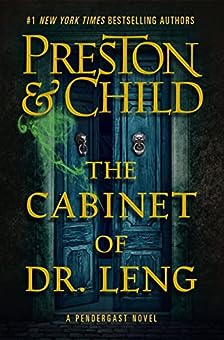 Astoundingly, Constance has found a way back to the place of her origins, New York City in the late 1800s, leaping at the chance, although it means leaving the present forever.

Constance sets off on a quest to prevent the events that lead to the deaths of her sister and brother. But along the road to redemption, Manhattan’s most infamous serial killer, Dr. Enoch Leng, lies in wait, ready to strike at the slightest provocation.

Meanwhile, in contemporary New York, Pendergast feverishly searches for a way to reunite with Constance—but will he discover a way back to her before it’s too late?

FBI Special Agent A. X. L. Pendergast always wants to protect his protegee Constance Greene from harm. But, against all odds, Constance has found a way to travel back in time. Heading to New York City in the late 1800s, Constance returns to the century of her birth to embark on a dangerous quest: stopping the era’s most infamous serial killer, Dr. Enoch Leng, from bringing his nefarious plans to fruition.

If Constance can stop Dr. Leng, she can finally prevent the events that led to the shocking deaths of her sister and brother… but can she survive herself, when up against one of the cleverest and most evil men of his age?